Veteran 737 Pilot Chris Brady is in the 737 simulator where the plane continues to nosedive plummeting to the earth as the automated “Rogue” MCAS keeps reactivating every 5 seconds causing the plane to spiral down out of control again and again. American Airlines pilot Dennis Tajer refers to it as “Flying with a Blindfold in a Dark Forest. It is powerful, relentless, like a monster in a cage” An airplane with a criminally negligent known “Design Flaw” which has created one of aviation’s greatest scandals. Pilots around the world are furious. It is an aircraft with a mind of its own.

Whistleblowers: “We were under pressure to minimize changes to cut costs and to get it done quickly.” Boeing continues to put Profits over People and to this day still denies responsibility. Boeing decided to just create a quick, sloppy and poorly tested retrofit of an old 737 instead of starting from scratch to create a brand new plane. The company management demanded no extra training on items put on the plane in order to make it more cost competitive over Airbus. The new larger engines were too large to fit beneath the current wingspan. They then did the unthinkable and moved the engine more forward and further up the wing. This created a completely unsafe change to the lift and drag as well as the overall aerodynamic stability of the aircraft. The plane was already showing an increase in upward nose pitch, stalling and potentially crashing at low speeds.

Boeing then introduced the MCAS (Maneuvering Characteristics Augmentation System) to compensate for the known dangerous, highly flawed and defective aircraft design. This new software was not hardly reviewed or even tested for safety by the safety inspectors. Boeing only provided the new 737 MAX pilots with a 56-minute IPAD course and no real time simulator training was required. MCAS was never mentioned or even included in the 56-minute IPAD course. Pilots only have 5 seconds to react before the Rogue software cause the plane to nosedive again. Pilot Chris Brady: “These are unintended consequences of an ill thought out add on that was necessary.” The plane was equipped with only one sole sensor with no fail-safe back up systems or any additional sensors installed with no checks and balances at all whatsoever. The one sensor was done deliberately by Boeing management in order to avoid Pilot flight simulator training. A 2 sensor system required mandatory Level D additional pilot training per the FAA.

The flying public has clearly been betrayed by Boeing and the FAA. Shareholders and Reporters have inquired if Boeing CEO Dennis Muilenburg has considered resigning. Ralph Nader is pressing for a Recall against the Boeing 737 MAX. His niece which was killed onboard the Ethiopian Airlines flight . He states that the FAA is in Boeing’s pocket. Pictured below is a photo of his now deceased niece Samya Rose Stumo. A vibrant and beautiful 24-year-old girl in the prime of her life. Also pictured are her parents in the courtroom where her father is holding photos of the deceased passengers and her mother is seen holding a poster representing each of the deceased passengers on the Ethiopian and Lion Air ill-fated flights. 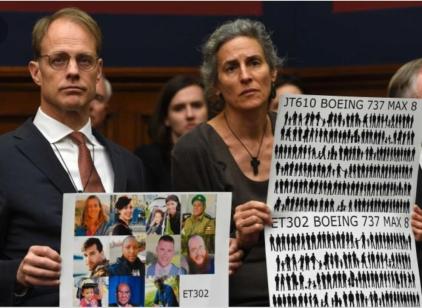 Boeing 737 MAX is the flying Ford Pinto of 2019. The Pinto was a known defective car design which has a spontaneously combusting fuel tank when hit in the rear end. The car killed over 2000 people and to this day GM has never taken responsibility for continuing to sell a car with a known fatal defective flaw.

American Airlines will be reintroducing the 737 MAX in Sept on its Miami to Medellin AA1127 / AA1128 and AA1136 / AA2219 Miami to St Maarten flights. Therefore, Colombian and Virgin Island passengers will be the flying Guinea Pigs on this flying metal death trap. It is not too late to start checking your flights to see if you are booked on a 737 MAX. This can be checked on the FAA website as well as apps FlightRadar24, Flight Stats and FlightAware.

Capt. Dennis Tajer, spokesman for the Allied Pilots Association — which represents American Airlines pilots — described Boeing as having a “poisoned, diseased philosophy.“In an interview with NBC News’s Lester Holt, American Airlines CEO Doug Parker was asked how the airline planned to reassure passengers. He replied: “We shall see.” Yet some airlines — United and Southwest among them — have already declared that any customers booked on a future MAX flight who feel uncomfortable will be re-booked on another aircraft. “Free of charge.”

Do not allow yourself or your loved ones to be placed on this disaster of an airplane which is intentionally defectively designed to crash by Boeing. Do you really want to trust your life in the hopes that a software will work properly to overcompensate a plane that is designed to crash since it is aerodynamically flawed? It is time to demand a recall of the 737 MAX and Boycott this airplane until this is accomplished.