“La Compagnie, the all-business-class airline celebrating its 5th anniversary this year, might be an alternative. In fact, if you book by June 13, the company is offering round-trip flights from New York/Newark to Paris for as low as $1,000. Yes, business class. The company currently flies two Boeing 757s and a new Airbus A321neo non-stop to two destinations, Paris and Nice, from New York/Newark (EWR). The flight to Paris Orly Airport takes about 7 hours non-stop; the flight to Nice about 7 ½ hours. Both the 757s and the A321 are outfitted as all-business-class aircraft. The 757s have 74 lie-flat seats, while the A321neo has 76.  About 60% of La Compagnie’s customers are business travelers, 40% are leisure, an area growing particularly on the new Nice route. Jean-Charles Perino, Co-Founder of La Compagnie, says, “It’s about 80% Americans; a lot of Americans who go to Nice or the Cote D’Azure own apartments there.” (forbes) 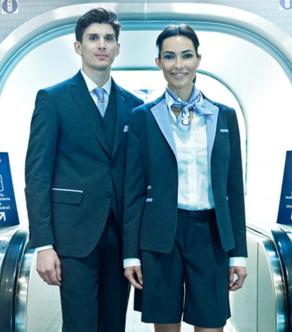 “There were hot towels and generous pours of Piper-Heidsieck Champagne and a three-course seasonal menu conceived by chef Christophe Langrée that featured a caramelized onion soup so vivid in flavor, I found myself remembering it days later. And there were brie and Cambozola blue cheeses, and a kind flight attendant who went around closing the window shades while saying, “Unteel zee morning sunshine, madame.”(robbreport)

“This first of two advanced single-aisle sprinters, these jets also upgrade the trans-Atlantic experience with 76 fully lie-flat business class seats from tip to tail. Each passenger is treated to a 15-inch touchscreen for inflight entertainment, paired with noise-canceling headphones – and when it’s time to grab some shut-eye on the seven-hour flight, the flatbed is fitted with a mattress topper. The 2-2 configuration might not be everyone’s idea of modern business travel but with a generous 62″ pitch it’s arguably sufficient for this 8½ jaunt, especially on the red-eye leg departing New York-adjacent Newark Airport at 7.30pm to reach Paris’ Orly Airport at 8.20am the next morning. La Compagnie is also providing free unlimited broadband WiFi above the clouds. We want our passengers to experience the internet just like they do at home or in the office,” suggests Jean Charles Périno, EVP of Sales and Marketing for La Compagnie. Our mission is to make business-class more accessible to everyone at the most attractive fare. La Compagnie runs twice-daily flights between Gotham and the City of Lights and pampers its premium passengers with anti-allergenic pillows, large soft blankets, and a Caudalie travel care kit, along with restaurant-grade meals from renowned chefs. (australianbusinesstraveler)

We would like to congratulate La Compagnie on their 5th Anniversary in serving the New York to Paris market with their first year of profitability. Now we need to see this wonderful product expand to the West Coast of the United States next. This certainly sounds like the best value for a business class offering with transatlantic service from New York. Let’s hope that this is just the first of many more destinations that we will see from La Compagnie in the years to come.